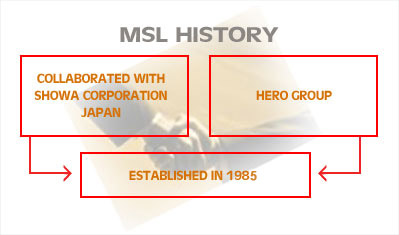 A seal of quality, commitment and competence

Established in 1985, in technical and financial collaboration with Showa Corporation of Japan, the pioneering global leaders in the manufacture of shock absorbers, Munjal Showa Limited is a member of Hero Group, a US $ 1.3 billion manufacturing conglomerate, with a 45-year history. The Hero Group, a major player in the manufacturing sector in India, comprises of 15 active companies with complete backward integration for automotive manufacturing. Prime companies in the Group are: Hero Honda Motors Limited, a joint venture with Honda Motors of Japan, Hero Cycles, the largest bicycle manufacturer in the world, Majestic Auto Limited and Hero Puch, manufacturing mopeds and scooters.

Munjal Showa Limited in its joint venture with Showa Corporation, designs and manufacturers shock absorbers and struts for leading two-wheelers and four-wheelers. The Munjal Showa manufacturing plant is spread over an area of 24075 sq mt in the industrial area of Gurgaon, Haryana, on the outskirts of the National Capital Territory of Delhi, India.

Today Munjal Showa Limited is one of the largest suppliers of shock absorbers to major auto giants in India, Japan, Germany, the United States and the United Kingdom, amongst other developed markets. The Company’s products conform to the highest standards of quality, safety, comfort and dependability and are QS 9000, ISO 14001 and ISO 9001 compliant. The use of advanced technology and a team of experienced personnel have led to outstanding growth in the Company.

MR. YOGESH MUNJAL is one of the most successful and eminent Industrialist in the Automobile Industry. He is currently holding the position of Chairman & Managing Director of Munjal Showa Limited (a Hero Group Company). He is an accomplished business leader, persuasive speaker and a dedicated entrepreneur at providing strategic direction. He has an entrepreneurial style of management that is a blend of enthusiasm and dynamism and tends to focus on people’s strengths to bring out the best in them for the progress and prosperity of self as well as for the Organization.

He was born on Feb 13, 1940 in Lahore, Punjab to parents, Satyanand Munjal and Pushpavati Munjal. He holds a bachelor’s degree in Architecture from IIT, Roorkee. He is a distinguished and active alumnus of the Institute. Eversince he finished his formal education, he was associated with many of the Hero Group companies in the capacity of CEO and contributed for in transforming companies into world leaders.

His journey with Munjal Showa started in the year 1985. MUNJAL SHOWA LIMITED is an ISO 14001, IATF 16949 & OHAS-18001 and TPM excellence consistency / awarded company having collaboration with SHOWA CORPORATION of JAPAN – the largest manufacturers of SHOCKERS in the world. The company is engaged in the manufacturing of world class Automotive Components such as Front Forks, Rear Shock Absorbers for Motorcycles and scooters & Struts, Window Balancers for Vans and Cars.

He has nurtured all the three manufacturing plants e.g. Gurgaon, Manesar and Haridwar with relentless care and concern. He personally reviews growth and expansion plans routinely to ensure sustained growth and hegemony in industry with an objective of maximum customer delight.

He’s blessed with a son and daughter; both are well settled in their respective lives.

Throughout his career, he has received numerous awards including TPM Excellence Consistency Award from JIPM, Japan for Gurugram and Manesar plant and Life Time Achievement Award from Rotary Club (Delhi Chapter) and from Alumni Association of Roorkee, he has also received the Best Client Award from Leadership Management Institute, USA.

He strongly believes in promoting education and is actively involved in corporate social activities of Educational institute, Hospitals, Spiritual & Religious institutions. His motto is to spread happiness and peace in the universe.